Welcome to Vatican City, the smallest country in the world and home of the Pope! 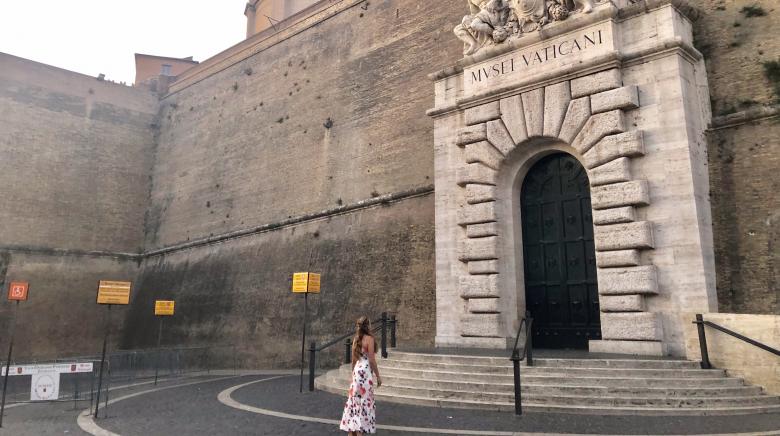 By both land perimeters and population, Vatican City is currently the smallest country in the world. It is the residency of the Pope, who is the monarch of the tiny country and the head of the Roman Catholic Church throughout the world.

Even during the Roman Empire, the land carried the name Vatican. What the name originally means is disputed, but many believe it to either mean garden or some type of land or, that it carries the meaning of prophecy or an oracle. They believe this because in ancient texts the world referred to land that was uninhabitable to the Romans, but was meant for the gods, with evidence of shrines being built there.

The Vatican structures began to be built around the 5th century, but the Pope lived there only occasionally until 1870 and the capture of Rome, where Pope Pius IX lost control of the papal states and was forced to step down as Italy was unified under a new king. Since 1870, the Vatican has remained the permanent home of the Pope.

A Morning in the Vatican

Some people aren't tour-group people, preferring to learn and wander by themselves. I applaud all measures of travel, but I think in this particular instance, a tour group was the best option.

This is because the Vatican gets crowded, crazy crowded, lines that go on for hours where people fall into heat stroke crowded. Having a tour group allowed me to skip those lines.

I chose the earliest possible tour where they offer breakfast at the Vatican as an experience before you journey through the historic halls and chapels.

Be Aware - this meant we had to be at the Vatican by 6 am. But it was completely worth it. Keep in mind you can use the Uber app in Rome and that saved us a lot of time.

Being there so early allowed us to see and take pictures of the Vatican while nobody was around, a feat not easily done. It also allowed us to relax and eat a buffet style breakfast in the Pinecone Courtyard, overlooking monumental views.

After breakfast we were ushered into the museum and taken down halls lined with marble statues, famous paintings, and floor to ceiling tapestries. Most depicted religious events, but some were collected from the pagan beliefs of the Romans with their pantheon of gods and goddesses.

Tip! - Pay attention to the ceilings of every room you go in, I found that most of the time the ceilings were more extraordinary than anything else in the room!

Then we went into other rooms that were more connected to the Pope, for instance, the apartments of the Borgias. However, some of this was under construction and we had to bypass some gorgeous rooms. It's a good thing though! They are restoring the paintings for the future of the Vatican.

We were then led down into more a more modern space, stark white hallways filled with contemporary religious pieces and a projected video (which admittedly I skipped). We generally spent very little time here, as many of us were started to tire and grow thirsty due to the heat of summer.

Next, the Sistine Chapel.

Tip! -There is a small cafe just before the Sistine Chapel where you should grab a water, you'll need it!

The Sistine Chapel has been an important site for religious function since the 1400s. Its chief duty is the papal conclave,where the Cardinals of Rome elect a new Pope. The Cardinals are locked within the Chapel every day until the Pope is chosen. The vote must have a 2/3rd majority, and there is a strict protocol for the election. If the Pope is not chosen by the end of the day, dark smoke is released from the Sistine Chapel. If he has been, then white smoke is released and in modern times, bells chime along.

Be Aware - Holy places throughout Italy, including the Sistine Chapel and St. Peter's Basilica, require that men and women are dressed with some level of modesty. Shoulders most be covered and pants or skirts must reach the knees (although sometimes you can get away with a bit above the knee).

You have definitely heard of or seen the Sistine Chapel in pictures. No? Ever heard of Michelangelo? His painting The Last Judgement? The Stories of Moses or the Stories of Jesus? How about that ceiling painting where people try and touch fingers, reenacted by Monmouth College's basketball team (The Creation of Adam)?

Yeah, that guy. That's the chapel.

Well, it's insanely impressive. And one of the most sacred places in the whole world. In addition to dressing modestly, you have to speak at a low murmur or you will be shushed by the guards. They also don't want you to crowd the door and will separate you in two groups, those who sit along the edge and those who stand in a large group in the middle. You don't have a lot of time here with a tour group so don't waste your time.

My advice? - Grab a seat if you can, it's much easier to admire the paintings.

Fun Fact! - Michelangelo did not like to think of himself as a painter, preferring sculptures and architecture. And yet his paintings are some of the most famous in the world. Additionally, he was a bit of a smartass. When he got criticism from Biagio da Cesena, a papal master of ceremonies, for his nude figures in his paintings, he retaliated by putting Cesena's face on the body of Minos in his painting The Last Judgement. The figure is fully nude except for a snake that coils around his privates and is portrayed with donkey ears and resides in the part of the painting that represents hell. You can still see him today.

The Basilica is a sight to behold. It is the largest church in the world and is paramount to the Catholic tradition. Part of its importance is of course, it's relation to the Pope and its grandeur. But it is also (supposedly) the burial site of Saint Peter, the first Pope of Rome and one of Jesus' twelve apostles.

I say supposedly because there is no proof. It is said that Peter was buried just outside the Circus of Nero, part of the land that Vatican City now holds. He was buried in view of the Egyptian obelisk (which still stands today), and the old Saint Peter's Basilica was built on top of the area presumed to hold Peter.

When the old Basilica fell into disrepair, the new one was built in its stead. In the 1930s, Pope Pius XII allowed for excavations in the crypt of the Basilica. Many skeletons and bones were found, as the site had been used for years as a burial ground from the time of Nero to some of the first Popes (there were also shrines of emperors, exiled kings and queens among others). One shrine contains bones that were mixed with gold and purple decorations, a sign of an important internment, and although it could not be proven to be Peter's bones, the Pope announced to the world that Saint Peter's tomb had been discovered.

But, tomb or no tomb, religious or atheist, you should still visit the Basilica. Its importance to the world of art and architecture alone makes it an awe-inspiring visit.

When you walk in (shoulders and knees covered of course), its hard to grasp the splendor that greets you. It can be overwhelming, especially as you move further in and begin to grasp just how large the building is. The statues above and around you are exquisite, but are also gigantic - the most famous of which is probably Michelangelo's Pieta.

The hall is loud, but not as loud as it should be, because the murmurs of the throngs of tourists seem to get lost in the impossibly high domes. Tour groups shuffle back and forth, as ours did, trying to show you as much as they can in the time they have left. But the guides know that they will lose their groups to the hypnotizing beauty of the Basilica, and they end the tour at the alter, releasing you to explore on your own.

How long you choose to stay is your choice. But be sure to visit the Statue of Saint Peter and rub his toes for good luck (yes you are allowed to do this and will probably have to wait in line). Do at least one complete circle around the Basilica, and try to visit the rooms off of the main hall when tour groups leave them.

Tip! -If you want a good picture, try to get both the floor and the ceiling into one shot. Standing at one end of the hall and waiting for a break in tourists is what worked best for me.

Exiting the Basilica, you enter Saint Peter's Square. The central element of the square is the Egyptian obelisk. It is the same obelisk believed to have stood in front of the crucifixion of Saint Peter and for that reason, it was moved to stand again in front of Saint Peter.

The square is large and elaborate, because of course it is, how could anything less stand in front of the Basilica? It also has two fountains that can stave off the summer heat, because clearly no proper European square could be without a fountain.

Only a few steps past the square and you near the end of your trip. At this point, you're probably ready for a long nap. But at least you aren't one of those tourists waiting for hours in line!